Dan Rosanova talked about and showed some numbers and features of Azure Event Hubs and Azure Event Grid.

There are an amazing and insane number of messages being handled by this service today. 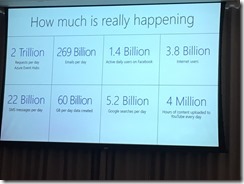 In Clemens session he talked about the difference between Messaging and Eventing (among other things). 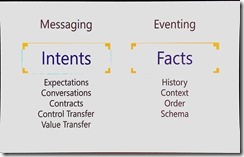 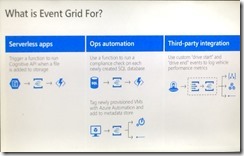 …and what the core concepts for Event Grid are. 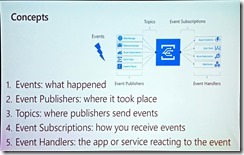 As well as what Event Hubs are and how those work. 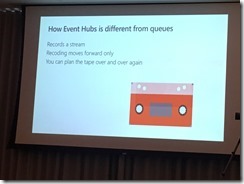 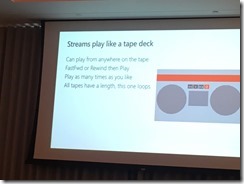 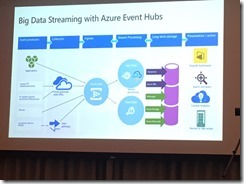 This table gives a high overview of some of the concepts of the services and their differences. 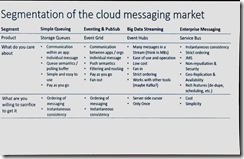 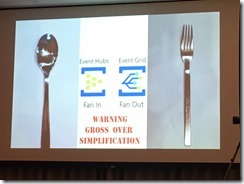 Johan Hedberg comments: The fact that there is no once size fits all or no silver bullet is as true as always. Especially working with cloud services there is overlap in what the different services offer. You can see how you can solve a problem regardless if you choose service A or B. The services we are using today in many cases are not the services that we began with. They just didn’t feel like the right fit as we started of. However as we tried and tested and monitored and evaluated our way through them, we found the services that worked best for us – were most stable, supplied the best throughput and latency and kept the costs low. For several of those scenarios we today use Service Bus services. Even if we didn’t start there. This to me highlights another benefit of cloud services. It’s just, in most cases, so easy to actually try a new services. Also, to keep on the Service Bus / Messaging topic, these services feel very mature and very stable at this point in time. Monitoring is not always easy though, although the metrics you need are there. You just need a good way to gather, react on and display them. Being at INTEGRATE2018 we should probably take that chance to look more at the features of https://www.servicebus360.com/

Miao Jiang talked about the rise of APIs and the increasing importance as well as the increasing standardization and existence of APIs in applications today. API’s today are a key business driver for many companies. The API economy is a well known term today. Again, this summary will only contain some key highlights. Like with the other technologies there will be deepdive sessions at integrate later in the week.

To meet the the importance of APIs today, you have API Management. In the use of API’s there are basically two roles. Publishers and consumers. For any of these roles there are a number of key concerns. To help with these is where API Management comes in. 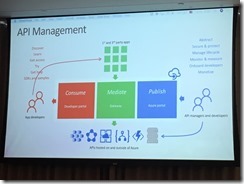 For many of the needs you have within API management there are policies.

The API-M service has seen an impressive growth like many of the other cloud services. 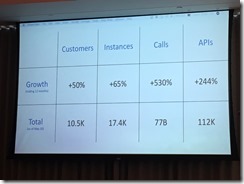 For API Management, the documentation starting point is here.

The main msdn forum is here.

The uservoice page is here.

The planning board is here. Miao mentioned some of the recent things the team has done. 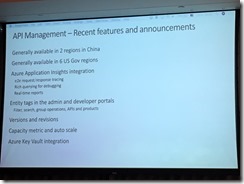 And that is just part of it, there are many other things in the product. 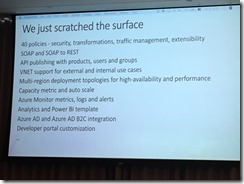 As far as planning goes there is more on the planning board than can be shown in one screenshot, so go there to view all of it. A selection of the board is given in the screenshot below. 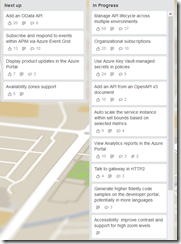 Johan Hedberg comments: I love the Application Insight integration. To me, having good insight is key to trust and understanding of what your application running in a cloud service is doing and how it is doing. I have a feeling based on what I have heard and seen so far that people sometimes start forgetting about tracing, logging and following up their application or code as they deploy to cloud services. Logging and examining tracing and metrics is not less important just because you deploy to cloud. It is as important or perhaps even more important! Deploying to cloud services does mean spending less time on infrastructure and plumbing, but it does not mean less quality requirements. You still want the same quality, or better. Just because you do not have a server to log into to view your logs does not mean you should not monitor your logs. There is so much functionality in the platform for monitoring. It’s up to us to use it.

Some of the highlights and most important parts of the session were the fact that the end of mainstream support is closing up on previous version of BizTalk Server.

They also went through the features of the Feature Pack 1 & 2 talked about the upcoming FP3. 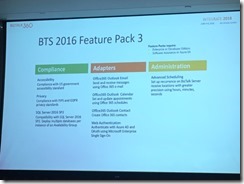 The key focus for FP3 is new adapters. Among those O365 mail, calendar and contacts. This were demo’ed using the added OAuth service that has been connected to the ESSO service within BizTalk.

The team is also keeping up with new CU’s. 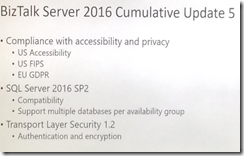 There were a number of things that have advanced statuses on the BizTalk uservoice that were not covered in today session that I hope are still given some love.

BizTalk has more then one forum, but the general forum one is here.

The team blog is here.

The BizTalk Server core documentation’s root folder is here, while the FP2 configuration and walkthroughs are here. If you have BizTalk Server 2016 Developer or Enterprise (with Azure EA or SA) you can download the Feature Pack here.

Johan Hedberg comments: For me BizTalk is more and more a part of the Hybrid Integration story, rather then THE integration story. So far the on-premise data gateway is far too limited to be a replacement for all of the on-premise integration needs that exists within mature established companies today. As the Integration Service Environment (ISE) gets established and the possibility to connect to vnets and through that more broadly, while still securely, connect to on-premise resources this might be of lesser importance as the technologies progresses, but today it’s note there. However, I do not think that Logic Apps coming to Azure Stack will be a major thing for the role of BizTalk, but I could be wrong. Time will tell.

Azure Functions is Serverless. You do not have to think about servers. You only think about your code. It’s event-driven and scales instantly. You are only charged for when your code is actually running and when it’s being executed.

If you have an IoT doorbell which triggers of a an image and uses image recognition to identify whoever is at the door – that functionality is available all of the time, but it only runs as someone actually shows up at your door. Serverless helps building applications in a fraction of the time it used to take.

Azure Functions is part of the Microsoft Serverless platform.

This session was an introduction to Azure Functions. Rather then trying to repeat everything said I’ll give some highlights. If you want to learn more I recommend there resources.

If you want to start learning about Azure Functions, the MSDN starting point is here.

“If you are doing something more complex, I recommend you use one of the more advanced IDE’s.” Aka don’t use the portal for production-grade code and functionality. Both Visual Studio and the Visual Studio Code IDE’s have great tooling. Visual Studio probably has a slightly better experience today, but both can be used.

Azure Functions are often used in Azure today to extend on the functionality of other services.

You can run Functions on variety of locations.

Jeff also talked about some anti-patterns. As you being building production grade code on Azure Functions these are good to keep in mind.

One key takeaway from this is, like in so many other cases, that personal preference will play a very big role.
You can read more at http://aka.ms/durablevslogic

Johan Hedberg comments: We’ve been using Functions for a while now. For several customer in several different projects. It works very well. It’s great both as a way of doing something very quickly, but also great for production use. Especially with the integration with Application Insights you get a very easy to build and easy to deploy application that still allows you very detailed insight into the workings of the application. Since it’s Serverless you pay per use (unless you actually tie it to your own App Service instance, which you can) you don’t pay for the number of Function Apps you have, or the number of Functions. Think microservices. You can quickly end up with a mess (a lot of Functions with questionable responsibility boundaries) if you are not careful. Also, another lesson quickly learned is that even if Azure Functions scales well and quickly, if you are using a limited resource, like a database, you still have to take care. If you are using Azure Functions with Logic Apps, you can easily set up a CI/CD process that will deploy your Functions and Logic Apps together. I have a previous blog post as well as a video available from last years Integrate conference.

Kevin Lam delivered an introduction to Logic apps. This session was a walkthrough of what Logic Apps is and the features and functionalities it has today. A 200 level session. Comprehensive but non-detailed. A few demos based on how easy it is for you to integrate Logic Apps with other services by Derek Li. Sessions later in the conference will go more into depth on selected parts of the different features.

Are you just getting started with Logic Apps. There is great MSDN content out there. Here is a starting point. And of course alot of community blog content as well.

This session showcased improvements in the Event Grid trigger to be able to filter on certain events in the trigger itself without having to receive the message and filter with a condition inside the workflow. It also showcased the important, and extremely easy way to use additional services, like Functions or Cognitive services.

In another session on Logic Apps later in the day the team also talked about “Enterprise Integration with Logic Apps” in which they mentioned the new features of the enterprise connectors. With some SOAP connector news well as SAP adapter improvements. With SOAP you can now create first-class SOAP connectors by importing wsdl (also see custom connectors). You can also create passthrough SOAP services and use the on-premise data gateway to access services behind the firewall. 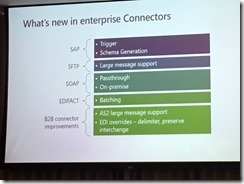 For the SAP connector, it registers itself (the gateway) with SAP to receive an event / a message instead of polling. 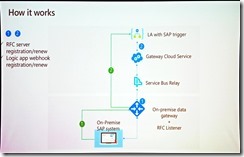 There they also talked about some of the news in mapping. Like XLST 2.0/3.0 maps. XLST 3.0 maps allows you to do things such as doing a JSON > XML > JSON mapping. It also has a load of more built in functions and other things such as performance improvements, dynamic evaluation etc. 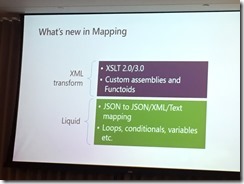 They also talked a bit about what’s new in monitoring. 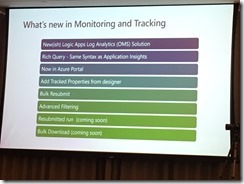 One of the more interesting parts of the introduction/overview session was of course the “What’s coming?” section: 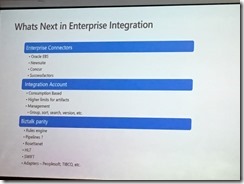 Do you want to know more about what is coming? You know the team has their planning board online? It’s here. 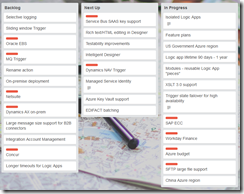 Don’t miss the monthly updates directly from the team here.

Also, if you are missing something, make your voice hear using the uservoice here.

Got a question: The msdn forum is here.

Johan Hedberg comments: This session is of course a s must have. Of the 400 or so in attendance about 50% raised their hands when asked “who has used Logic Apps?”. More than I expected if that means “in production” but less than expected if it means “have ever tried it out”. Great to see the innovation of new features continuing. And again, features to enable you to reduce your usage of the platform and the instances started unless you actually want it to are great. Even though some things, like SOAP support for the on-premise gateway has been added, I still want to see more hybrid capabilities and more feature in the on-premise data gateway.

Be Logical – Notes from Johan Hedberg
Blog at WordPress.com.